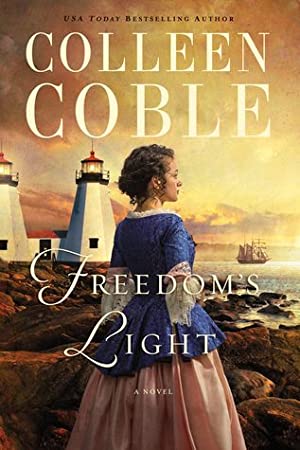 Hannah Thomas left the South and all that was familiar to marry her beloved John. But the fact that she’s never been quite accepted by his mother and sister and that she doesn’t quite fit the strict Massachusetts Puritan community only becomes more difficult when John is killed in one of the first battles in the war for freedom. Hannah is allowed to continue to serve as lightkeeper for the twin tower lighthouses on the lonely coastline, but it is grueling work for a woman alone. One of the first shipwrecks washes ashore a handsome captain she thinks is a Tory, but she soon finds out he’s working as a spy for Washington. Much stands in the way of their happiness including the need to protect his secret, pressure from John’s family to marry another, near-constant disapproval from the townspeople, and the appearance of Hannah’s wayward sister. Coupled with the strain of war, Hannah isn’t sure she’ll ever see the light of freedom.

A copy of this book was received for review via Thomas Nelson. In no way has this influenced the review. The opinions expressed in this review are of the reviewer only.

The Light Before Day

The Price of Valor